View of branch/fleece sculptures in my studio at Vermont Studio Center, 2008

All that art that has been made…. A blessing and a curse. Why do we make it? (That’s a rhetorical question.) Years of art-making = a lot of old art. The worst is the big stuff, the awkward mixed-media sculpture, the fragile stuff, the found object assemblages, the large paintings, not to mention the framed things under glass.

It’s shocking how it multiplies.. the older the artist gets, the more old art there is.

Some years after graduating from art school (where I majored in ceramics) I stopped making art. For 10 years, when I became a wife, then a mother, from 1985-1995, I focused on life without art-making (however, there was still plenty of old art to haul around.) And then I reclaimed who I was, who I am. I started making art again (it saved my sanity) and the work slowly began to pile up— pastels, paintings, figure drawings, then mixed media collages, and assemblages, and then sculpture, and then graduate school, and whoa!~ ! 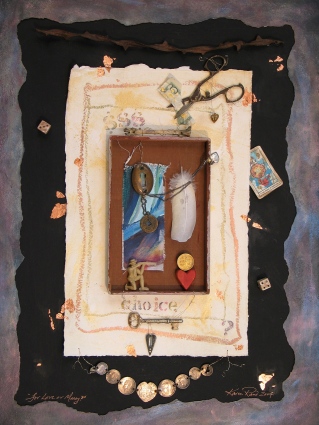 I recently had to take full responsibility for many years-worth of my old work, loads of old art which I had conveniently forgotten about, stored at my old home. The past several weeks have been a stressful marathon of clearing out my old home and studio, which was just sold. A bittersweet event. Though I have not lived there for the past four years, the place still harbored a lot of my old art (and art books and art supplies, not to mention memories) My ex-husband and I designed and built it, in 1995, and the amount of artwork that was still there was overwhelming.

It was not only my own work I had to determine what to do with, but that of my two daughters— also artists, both prolific (think large paintings, some of them in the 6×8 foot range, and art school portfolios, and more that I just CAN’T throw out… )

The questions always remain— is it good art? Maybe, some of it. Meaningful? Maybe to me, on some level, but to others? And does anyone want this stuff? And what the hell does one DO with it all?? 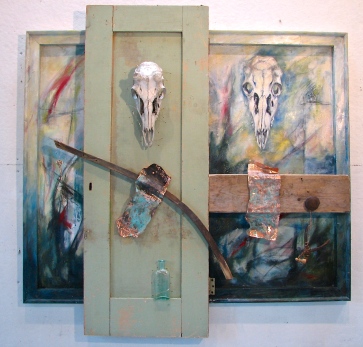 I did the sacrificial bonfire, tossing bad paintings and sculptures that I once thought were.. well, pretty good.. into the flames. The work was at one time meaningful, as a record of personal creativity, but not worth keeping. In the end, lots of stuff went to the dump. (And my garage, and my basement, and into a storage unit…not to mention my studio, which is overly-full at the moment.) 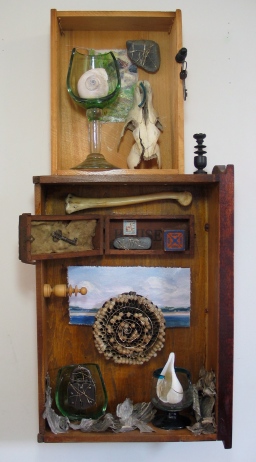 I also discovered that some paintings were “borrowed”, or lifted,  from my home studio after I moved away… they just disappeared. (there were various people coming and going from that locale. I still am not sure just how much was taken. I keep remembering various pieces, wondering.. hmmmm… what happened to that one?)

Some paintings have been donated to non-profits, like Art Connection RI and to galleries with permanent collections, like Alexey von Schlippe Gallery of Art.

I’ve donated art countless times to good-cause fund-raisers. (I’m pretty much done with that. I’m tired of being asked to contribute my art, with no recompense, to raise money for “a good cause”) Some pieces have gone to friends who really loved them.

What do you do with old art that is taking up space? Give it away? Donate it? Burn it? Take it to the dump? Put it in storage? If you feel like it, add to the conversation. 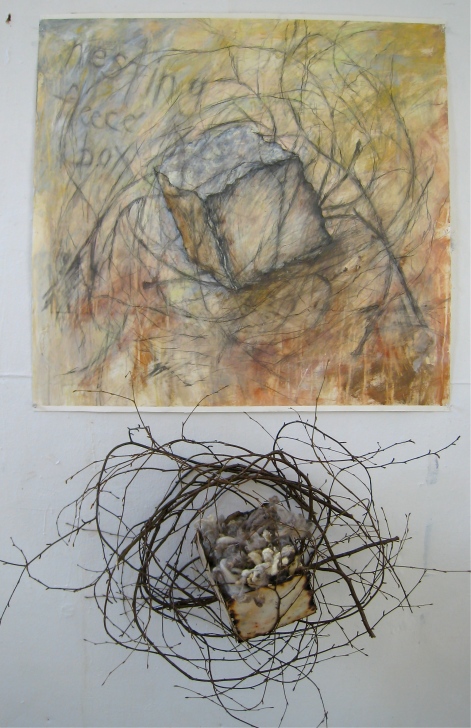